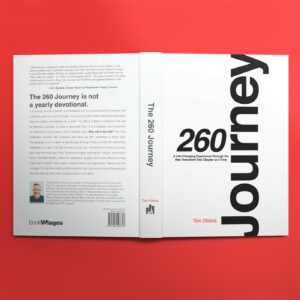 The 260 Journey
The Man Who Lived in a Cemetery

Wow, today’s reading is filled with action, miracles, and healing. It’s nonstop from verse 1 to verse 43. Mark 5 starts with a town demoniac who lived in a graveyard and acts as the welcoming committee for Jesus and the disciples and ends in a house where a dead twelve-year-old girl’s body is laid out and a bunch of laughing people who think Jesus is out of His mind. In this chapter, Jesus casts out a legion of demons, heals a woman of a twelve-year disease that doctors had no cure for, and raises from the dead a young girl whose body would soon be in a coffin for her burial. Go Jesus!

Let’s pause and consider the first miracle of the man who lived in a cemetery. Read that section with me, will you?

When [Jesus] got out of the boat, immediately a man from the tombs with an unclean spirit met Him, and he had his dwelling among the tombs. And no one was able to bind him anymore, even with a chain; because he had often been bound with shackles and chains, and the chains had been torn apart by him and the shackles broken in pieces, and no one was strong enough to subdue him. Constantly, night and day, he was screaming among the tombs and in the mountains, and gashing himself with stones. Seeing Jesus from a distance, he ran up and bowed down before Him. (Mark 5:2-6)

I have had people ask me, “Can a Christian be demon possessed?” The answer to that question is based on your definition of Christian.

Paul tells us in Colossians 3:3 that when you become a Christian, “your life is hidden with Christ in God.” That means demons can’t find you to live in you. They can’t find the door to enter your soul and spirit; your life is hidden in Christ. That is my definition of a believer in relation to the demonic world.

The man was demon possessed, and the demon in this man had a name or a descriptive name: Legion.

Legion. This is not really a name but a description of what was going on internally in this man and the magnitude of the dark forces in his soul.

Legion was the term given for a battalion or squadron in the Roman army. It usually had 5,400 soldiers and 120 horsemen. This man was possessed by an army.

But something huge happened to start this man’s healing, something that gives us hope for people no matter how messed up they are. It’s all in verse 6: “Seeing Jesus from a distance, he ran up and bowed down before him.”

A man with 5,400 demons still has the ability to get to Jesus. He is able to run to Him and bow before Him. No matter how much demonic control is going on, we can see that God doesn’t let the demons control a life who wants help and freedom.

Look what happens next. The Message says it like this:

Everyone wanted to see what had happened. They came up to Jesus and saw the madman sitting there wearing decent clothes and making sense, no longer a walking madhouse of a man. (Mark 5:14-15)

Why would Satan launch that kind of attack against this man?

He would be a mouthpiece of God.
He isn’t just delivered.
He is about to be a preacher.

If Satan does not stop this man, ten cities are about to be changed.

But Jesus said no. “Go home to your friends,” he told him, “and tell them what wonderful things God has done for you; and how merciful he has been.”

So the man started off to visit the Ten Towns of that region and began to tell everyone about the great things Jesus had done for him; and they were awestruck by his story. (Mark 5:19-20, TLB)

No one is unsavable. No one is unchangeable. No one is too far gone. No one has too many problems. Not with Jesus around! Even if they have 5,400 addictions, they can be freed because of Jesus, who can command that stronghold to flee.

If you know someone who is far from God, who is really messed up, who is so out there that you have no idea if they would ever come back to their senses, let this story put faith in you.

Receive The 260 Journey via Email